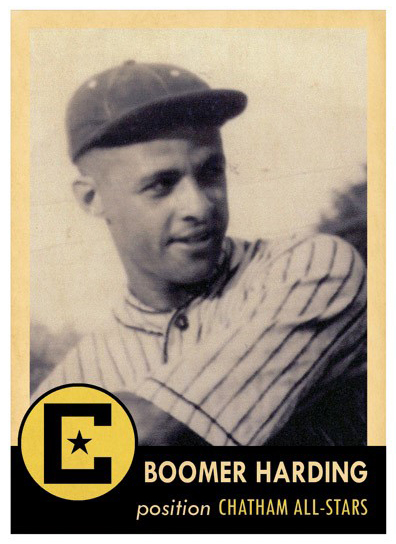 Born 6 August 1915 to Andrew ‘Bill’ and Sarah (Holmes) Harding in Chatham. He had seven siblings: Carl, Georgina, Florence, Beulah, James Leonard ‘Len’, Andrew, and Wanda. ‘Boomer’, as he was known in the community, was an all-round athlete who not only excelled in baseball, but numerous other sports throughout his life. He was a talented athlete since his high school years at Chatham Vocational High School, where he won numerous Western Ontario Secondary School Association (WOSSA) titles for pole vaulting, hockey, basketball, and soccer. He joined the Chatham Coloured All-Stars while still a teenager, helping them to win the Ontario Baseball Amateur Association Intermediate B championship in 1934. During World War II, Boomer joined the Canadian Armed Forces, and served overseas. During his time with the army, he competed in athletic events, such as pole vaulting, and he also participated in a travelling hockey team intended to entertain Canadian soldiers. After returning from the war, Boomer had a tryout with the International Amateur Hockey League, earning a spot in 1946 with the Windsor Staffords, a Detroit Red Wings farm team. He was the first black player in that league (and was the first black player to skate at the Red Wings’ arena, the Olympia) at a time when only a few black players were in advanced hockey.

He married Joy Handsor in April 1940 and together they had one son, Blake (m. Pat). Harding had two grandchildren, Kerry and Andrew. Boomer worked at the Chatham post office as a letter carrier from 1940 and retired in 1975 after 35 years of service. As a veteran of WWII, he was a member of Branch 628 of the Royal Canadian Legion. In his later years, he was part of national teams competing in darts, where he placed among the top senior players in the country. He also officiated for various sports in the Chatham community, such as softball, baseball, hockey and soccer. He was a member of the Campbell African Methodist Episcopal Church. He passed away 14 September 1991 at 76 years of age.

"Boomer played first base. And he was another guy that was on base a lot. And if he didn’t get a hit he’d walk because when you walk in a baseball game you got a good eye. And he had a good eye, because he was on base a lot" (Harding-Milburn, "The Chatham All-Stars: An Interview with Kingsley Terrell," Polyphony 7, (1985): 111-120).

“Wilfred (‘Boomer’) Harding holds down first base for the club and his fielding and batting have been big factors in the Stars’ march. He bats in third position on the line-up and is a hard man to keep off the base-paths. He has a good reach and races far to the left or right to cut off hits” (Calder, "In a Foreign Field Today." Chatham Daily News, October 13, 1934).

“Boomer Harding was an extraordinarily talented, all-round athlete who excelled at baseball, hockey, soccer, and softball. Unfortunately, being born in 1915, he participated at a time when athletes of colour were not readily accepted. He faced prejudice head on and won the respect and friendship of many of his teammates, opponents, and sports fans across Ontario. Many believe that, if the time had been right, Boomer could have competed at a major league level in either baseball or hockey. For 50 years he participated at a very high level in a wide variety of sports and left a legacy of courage, pride, determination, and sportsmanship. In 1988 Boomer was awarded an Olympic Gold Achievement Medal in honour of his fifty-five years of sport achievements. This medal was given in celebration of the 1988 Calgary Olympics and only eighteen Canadians were so honoured” (Chatham Sports Hall of Fame).

“Ask Anybody here about Wilfred (Boomer) Harding and they’ll tell you the man who delivered mail to their doors for 35 years is one of the finest human beings they’ve ever met. Compassionate. Never an unkind word, they say—unassuming. Loves dogs and kids. Outwardly friendly and inwardly shy. Nice man. Everybody says Boomer Harding is a gentleman. Few people here, however, rarely mention Boomer’s standing as one of the city’s most outstanding athletes over four decades” (Miller, “Boomer Harding— One Great Guy,” London Free Press, September 7, 1978. B18)

“I remember going to Olympia one day for public skating. The guy at the gate stopped me. I reminded him the sign outside said ‘public skating.’ He told me the sign didn’t really mean what it said”— Boomer Harding (Miller, “Boomer Harding— One Great Guy,” London Free Press, September 7, 1978. B18)