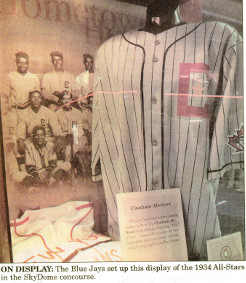 The Chatham Coloured All-Stars’ story is part of the larger history of Black baseball in North America. Until the late 1940s, Black players were banned from the major leagues, and were not always welcome on white teams at the community or amateur level. Baseball, however, was popular in many Black communities, and quite often teams would barnstorm -- travel and play exhibition games in other towns, usually against white players. It was a way to cover costs, earn a bit of money, and at the same time it gave players a chance to show off their baseball skills.

The Chatham Coloured All-Stars began this way – in 1932, a group of friends playing at Stirling Park, in Chatham’s east end neighbourhood, formed a team and began barnstorming around southern Ontario. In 1933, Archie Stirling, a long-time east end business owner and a local representative for the Ontario Baseball Amateur Association (OBAA, later known as OBA), noticed their skills, and got them into the city league where they competed against the white teams. The Chatham Coloured All-Stars quickly became known to fans and local newspaper reporters alike as an exciting, hard-working, and highly-skilled team. Then, in just their second year in the league, the Chatham Coloured All-Stars won the provincial championship, Intermediate B division, defeating Penetanguishene in the final series. They were the first Black team to win an OBAA title.

As an African-Canadian team, they faced barriers and challenges their white counterparts in the league did not. They regularly faced overt discrimination both on and off the field. Former players spoke about the racial taunts coming from the stands and the questionable officiating calls during the games. Traveling to away games, at a time when Black people were often barred from restaurants and hotels in southern Ontario, proved a particular challenge. Several of the players recalled getting turned away from a hotel in Penatanguishene on the eve of their 1934 championship series debut, and having to travel to a nearby town to find a place to stay. As well, in the early days, the team had only sporadic financial sponsors, and covering their costs to play and travel was difficult.

The player roster included many talented athletes. The Hardings, a highly athletic family, contributed three team members: Len, who later managed the team; Wilfred “Boomer,” who also broke barriers by becoming the first Black player in the International Hockey League, playing for the Windsor Staffords in 1946; Andy who joined in 1935. An older brother Carl played a few games with the team, but he spent most of the 1930s in St. Thomas and Kirkland Lake, Ontario and played baseball and hockey there. Other players included King Terrell, a left-handed third-baseman whose skills continued to be talked about years later. Cliff Olbey and Gouy Ladd were outfielders, and Ross Talbot was a first baseman. The coaches included Lou Pryor, Percy Parker, a third-base coach and Joe “Happy” Parker, the manager. Some of the players came from communities outside Chatham – the Robbins brothers, Stanton and Hyle were from Buxton, as was Sagasta Harding. Earl “Flat” Chase, grew up in Windsor. He was a pitcher and the team’s power hitter, who set records for home runs across southern Ontario. Also from Windsor was Ferguson Jenkins Sr., a centre-fielder who joined the team in 1935. The All-Stars also recruited a couple of men from Detroit -- Don Washington, a catcher, who later played baseball in Strathroy, and Don Tabron, a shortstop, who along with Sagasta Harding, was one of two surviving team members who attended the 2002 Toronto Blue Jays game, where the All-Stars were honoured. Wellington or “Willie” Shaugnosh was a First Nations man, a pitcher from Walpole Island who joined the team in 1935 and played with them for a couple of years.

No matter how talented they were, however, none had the opportunity to play in professional leagues, as they were playing more than a decade before Jackie Robinson broke the colour barrier in major league baseball in 1947.

The Chatham Coloured All-Stars continued to play throughout the 1930s, with the roster changing slightly. The team reached championship play twice more, in 1935 and in 1939. In 1935 they won the city title and went on to win the Western Counties Baseball Association championship, Intermediate A division, defeating Strathroy. They lost a series to Sandwich in the Essex County League, however, and did not advance to the next level. In 1939, the Chatham Coloured All-Stars reached the all-Ontario finals against Meaford in OBAA play, but a dispute arose over the location of the final game and no title was awarded. After the outbreak of World War II, the Chatham Coloured All-Stars stopped playing, and several team members served in the war, including Wilfred “Boomer” Harding, his brother Andy, and coach Lou Pryor.

Through the 1940s and early 1950s, many of the former Chatham Coloured All-Stars members played on other community teams. In 1946, a new team formed called the Taylor ACs, named after the Taylor Institute that provided sports and community programs in Chatham’s east end. Wilfred “Boomer” Harding managed the team, and players included several former All-Stars teammates: Andy Harding, Earl “Flat” Chase, King Terrell, and Gouy Ladd. Other members included Ken Milburn, Bill Henson, Abie Scott, Orville Olbey, Pete Browning and Clarence Crosby. By the early 1950s, this team was known as the Taylor AC Panthers, and later, the Kent Panthers. By this time, Alan Wright was managing the team, and several sons of the original All-Stars players and coaches were playing, including the sons of Earl “Flat” Chase --Earl Jr. and Horace, and Lloyd Pryor, son of All-Stars coach Louis Pryor.

In the years that followed, the Chatham Coloured All-Stars received some recognition of their achievement. In 1984, on the fiftieth anniversary of their 1934 OBAA win, the City of Chatham gave commemorative plaques to the surviving members, Wilfred “Boomer” Harding, Hyle Robbins, Cliff Olbey, Sagasta Harding, Don Washington and Don Tabron. In 2002, the Toronto Blue Jays wore replica jerseys of the All-Stars, in a major league baseball tribute to Negro Leagues. A bus with several hundred people from Chatham – many descendants of the Chatham Coloured All-Stars team – went to Toronto for the game. The last two surviving team members, Sagasta Harding and Don Tabron, along with Earl “Flat” Chase’s son, Horace, threw out the first pitch. While no members of that original team are still living (Don Tabron passed in 2009 and Sagasta Harding in 2002), their names are still remembered and their accomplishments and hardships still recalled. We hope that this site will help keep their memory alive, and will introduce their story to new generations of Canadians.