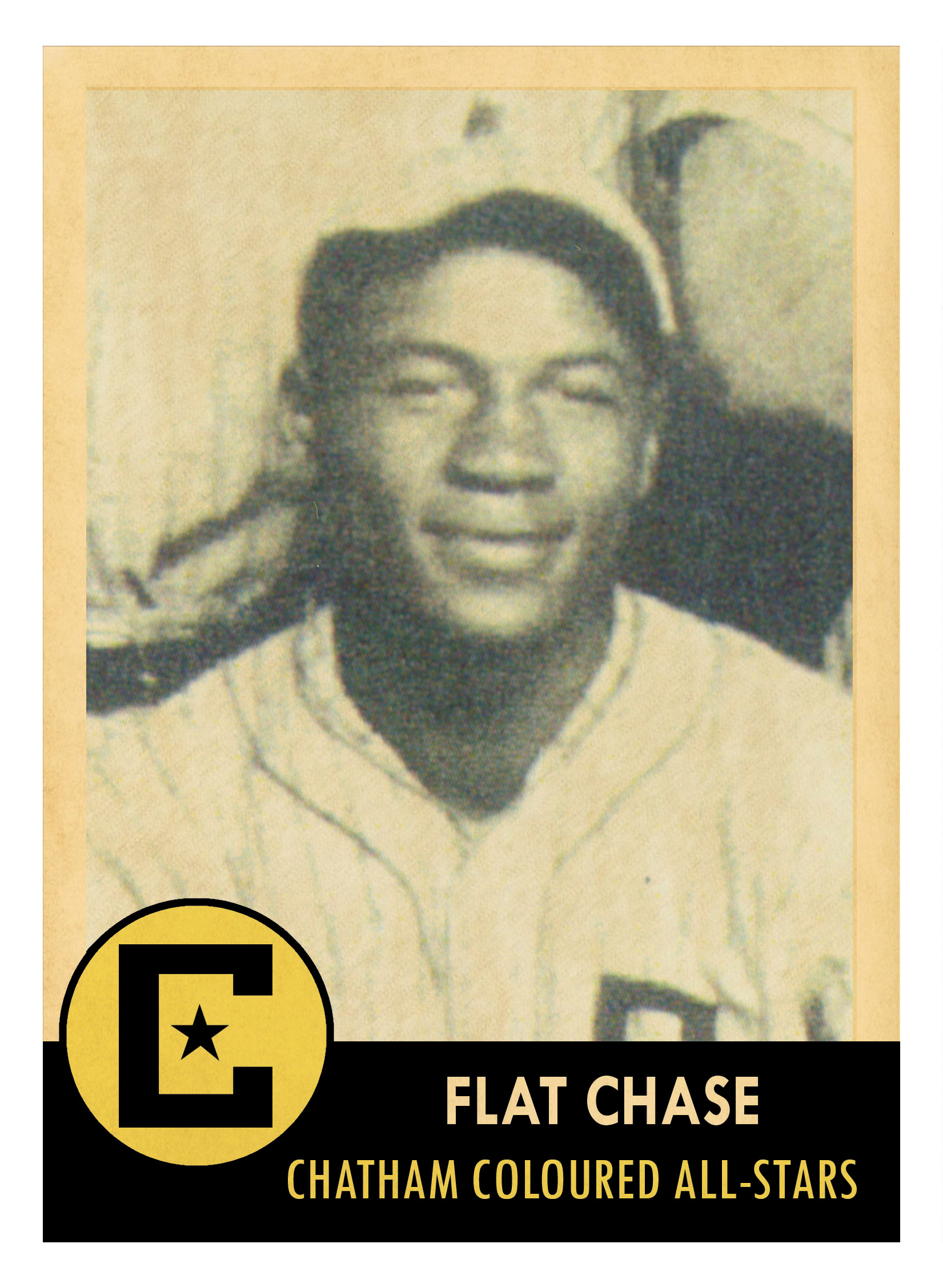 Earl ‘Flat’ Chase was born in 16 August 1913 in North Buxton, to George Chase and Elva Gambril. He had eight siblings: Arthur, Viola, Lloyd, Harold, Edith, Richard, Ileen, and Ione. He later moved to Windsor in the 1920s and lived on Mercer Street, across from a ball park where he spent most of his childhood. At the age of 15 he was playing baseball for teams such as the Second Baptist Church and the Detroit Church League Champs. His talent was clear at a young age, as he quickly built a reputation as one of the finest ball players in southern Ontario. In 1934 he was recruited to join the Chatham Coloured All-Stars. His athleticism and skill was a highlight in nearly every game, and his showmanship— “something of a rumba everytime he went to bat” entertained fans across Ontario (Chatham Daily News, September 12, 1934). In the final game of the 1934 Ontario Baseball Amateur Association championship series with Penetanguishene, Chase outpitched opposing hurler Phil Marchildon, who later played professional ball with the Philadelphia Athletics and the Boston Red Sox.

Teammates and players both said that the only thing keeping him from the major leagues was the colour of his skin. Fellow All-Star player, Don Tabron, stated that at “every park we played in he had the record for the longest ball hit,” a record in the ball parks of Strathroy, Sarnia, Aylmer, Welland and Milton (Chatham Daily News, October 10, 1984). He was able to throw a pitch ranging from 80-100 miles an hour, and his astounding, versatile abilities to pitch, catch and play infield made him a standout. In 1984, Don Washington told the Chatham Daily News that “Chase should have been a big league pitcher” (Chatham Daily News, October 10, 1984). Ben Talbot noted that Chase “threw the ball so hard that some players in the city league didn’t want to pinch hit against him” (Chatham Daily News, October 10, 1984). A power hitter, Chase once hit .700 in the Chatham City League, a remarkable average showing his baseball brilliance. He played with the London Majors in 1944, steering them towards their victory in the Canadian Sandlot Congress championship. He also played for Patterson Cars, Windsor City League Champions, and the Windsor Stars, as well as the Chatham Shermans, Chatham Hadleys, and Arcades. Chase worked in Chatham’s sanitation department. He married Julia Ethel Black 1 November 1934 and they had four children, Earl Jr., Horace, Marilyn, and Gladys. He passed away 5 May 1954.

“If you were in Welland today and told anybody you were from Chatham, the first thing they’d tell you would be about the homerun Flat hit there one day. It was one of the greatest moments because I was on first base when he hit it. The ball not only cleared the right field fence, it cleared a building way behind the fence. People in Welland later said the ball ended up downtown. Flat was the most gifted hitters I’ve ever seen. There’s no question in anybody’s mind who ever say him that he would have been a major leaguer had it not been for the colour barrier” -- Boomer Harding (Miller, "Boomer Harding--One Great Guy," London Free Press, September 7, 1978).

"Earl "Flat" Chase was born in 1910 in Buxton, Ontario but moved to Windsor when quite young. He lived across the street from a ball park and all his spare hours were spent there, participating and learning the skills of the game at which he became very proficient. From the 1920's to the 1950's, inspired by Babe Ruth, baseball was king in North America as every city and town had a men's baseball league and every city and town played other communities. Chatham was no exception. "Flat" was a very versatile player as he could catch, pitch, and play all infield positions. Although he led many leagues in batting in his career, he became renowned as a long homerun hitter as he held records for the longest balls hit in Sarnia, Strathroy, Aylmer, Welland, Milton, and Chatham” (Chatham Sports Hall of Fame).

“The Stars this year are favored by a strong four-man pitching staff. Flat Chase, smoke-ball king of the City League, has been the mainstay of the pitching staff most of the season and has come to be recognized as one of the hardest hitters in amateur ball” ("Stars Begin O.B.A.A. Playdowns Thursday," Chatham Daily News, September 5,1934).

“’Flat’ Chase, hard-hitting shortstop for the Stars, supplied the biggest thrill of the afternoon when he drove a mammoth drive far over the right field fence in the sixth for a home run. It was the longest drive in the history of the local park” ("Stars Even Round with Clever Win," Chatham Daily News, September 24, 1934).

“Flat Chase, who was the first to face Shupe, nailed the Welland moundsman’s first delivery on the button and the crowd sat fascinated as the sphere threatened to vanish into the heavens. When last seen, the ball was disappearing over the large sheet metal shed outside the right field fence. Chase was given a standing ovation by fans for his performance. It was easily the longest hit ever made in the park” ("Bits About the Stars," Chatham Daily News, September 25, 1934).