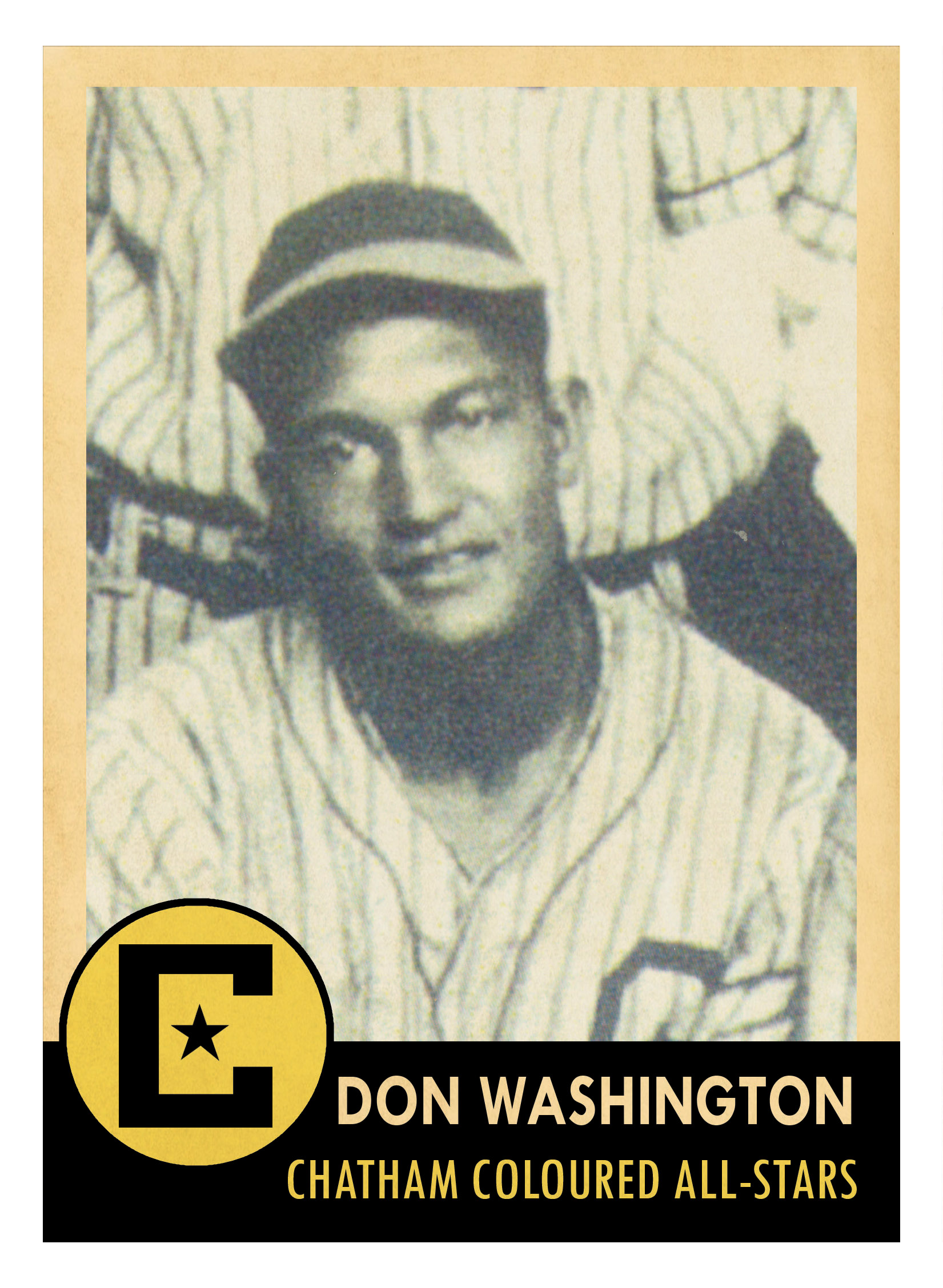 Donise (Don) Washington was the catcher and captain of the Chatham Coloured All-Stars. He was originally from Detroit, yet the Chatham Coloured All-Stars "passed him off as Windsor" because it was against OBA regulations to play in the league because he was American. The Chatham Daily News named him as "the best in the city and the brains of the team" (Chatham Daily News, September 5, 1934). Despite his apparent "awkward batting stance," Washington was a consistent hitter for the team. Following his 1934 OBA championship win with the All-Stars, he was recruited by Strathroy, “the first town in the district to import a coloured ball player,” where he quickly became a fan favourite (Art Cartier, Politics and Other Games, Vol, 2. London: London Free Press, 1969, 68-70). His ability to pick men off the bases was noted throughout the local paper, the Chatham Daily News. His catching ability was also noted by his fellow teammate Kingsley Terrell who said, "I don't think there’s any catcher in the major leagues, the national leagues, the international leagues, any league, could catch any better than Donise Washington could catch" (Kingsley Terrell interview (1980).

“. . .the game showed just what Washington means to the club. He’s a fine target and good at picking men off the bases” (Chatham Daily News, August 20, 1934) “Don Washington, catcher of the Stars, is the best in the city and is the brains of the team. He is a great target and an able handler of pitchers. Though he has an awkward batting stance he is a hard and consistent hitter” ("Stars Begin O.B.A.A. Playdowns Thursday," Chatham Daily News, September 5, 1934).

"But the Stars are a remarkably [good] ball team. They’re led by a [master] of the diamond, Don Washington, who really knows baseball. He has brought along his pitchers this season in admirable style and he has done his share of work offensively and defensively too” (Calder, "In a Foreign Field Today," Chatham Daily News, October 15, 1934).

“Don East [Donise] Washington was a catcher, and I don't think there's any catcher in the major leagues--the National League, the international league, the major leagues, any league--could catch any better than Don East Washington could catch. I seen Don East Washington cut guys down at second base when he was on his haunches. He wasn't even standing up straight. He could throw a guy out just as easy as he could if he was standing up straight. And there was very few balls went by, he could trap a ball and talk about guys coming into home plate. He wasn't a rough guy but nobody would try to rough him up because he stood his ground, and he let everybody know, wherever we played baseball, that he was our catcher. And you heard all over, wherever you went to play baseball, say it was too bad he couldn't get in the major leagues (Harding-Milburn, "The Chatham All-Stars: An Interview with Kingsley Terrell," Polyphony 7, (1985): 111-120).