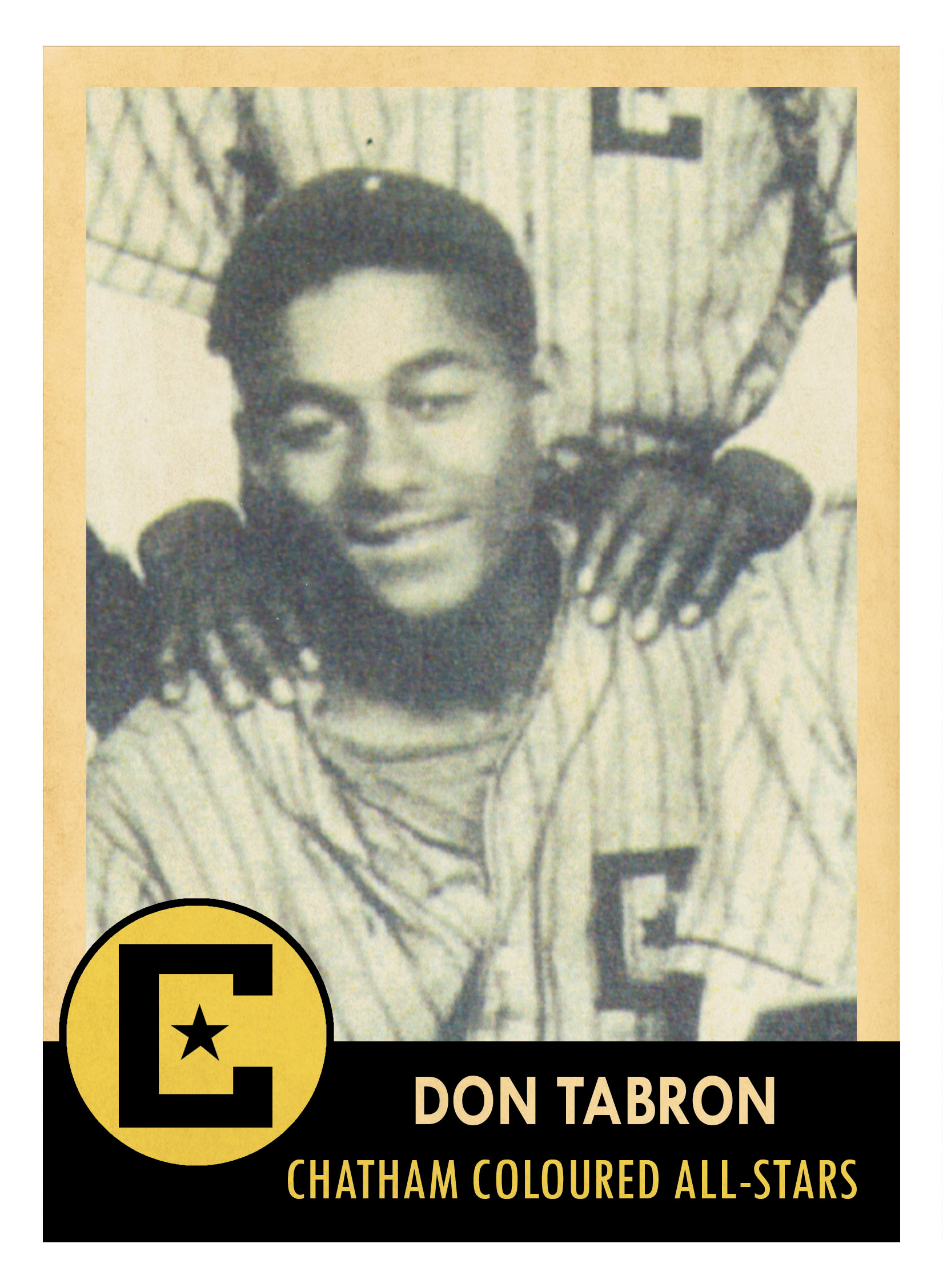 Don Tabron was born to Henry and Luella Tabron in Princeton, Indiana. He was the youngest of ten children. On 18 March 1925, the Great Tri-State tornado, one of the deadliest in American history, destroyed his family’s home and his school. He was then sent to live with his sister, Myrtle, on Detroit’s east side.

Tabron was only 18 when he joined the All-Stars – he came to Chatham through his friend, fellow Detroiter Don Washington, who had also been recruited to the team. They both roomed with the families of teammates for the baseball season. Tabron played shortstop, and also became a fine pitcher, impressing Chatham Daily News sportswriters with his whip-like pitches and overall strong play. He played in Chatham for a couple of years, and then returned to Detroit, where he played occasionally for the Negro League teams, the Detroit Stars and the Brown Bombers. In 1940, he married and became one of the first black apprentice electricians at Ford Rouge factory. In 1944, he opened the Tabron Electric company, a family business that existted for more than 50 years. He was married a second time to Theresa Simmons Howell, and married a third time to Velma Cooper. He had a daughter, Jo Ellen, and two sons, Donald Jr. and Gerald.

He was able to attend the Toronto Blue Jays’ tribute to the All-Stars in 2002, and was quoted saying: “I never thought that anything like this would ever happen” (Chatham Daily News July 15, 2002). He was also known to bowl and golf in his later years. He was the longest living survivor of the All-Stars, and passed away in 2008 at the age of 93 in Detroit.

“I never saw Don Tabron play ball before this year but when I attended the first game in which he played this season I wasn’t overly impressed with his work. He had a good arm but only a fair sense of direction and a poor hitting eye. Today he’s one of the greatest threats of the Chatham Stars, one of two teams who will meet in the City League playoffs beginning Saturday afternoon at Athletic Park. The arm is more deadly and he’s a surer man on ground hit balls. But more. He’s developed a batting eye and in recent games he’s knocked two home runs out of Stirling Park. Tabron has been taking a turn on the mound too and may yet develop into quite a pitcher. But he’s a real source of strength to the Stars today as a hitting short stop…” (Calder, "Most Improved City Leaguer," Chatham Daily News, August 8, 1934).

“The rise of Don Tabron to prominence in the City League this season has been phenomenal. Only a fair-fielding, weak-hitting short stop at the start of the season, he transformed himself into an able, all-round player by constant work. He and Don Washington have toiled for hours together in the mornings whipping themselves into shape for the OBAA campaign” ("Stars Begin O.B.A.A. Playdowns Thursday," Chatham Daily News, September 5, 1934).

“Tabron defeated Taylor’s Stars of Detroit, one of the strongest colored teams in the world. He allowed only seven hits and two walks and he fanned seven.” ("Braggs Defeated in Third and Final Game of Series," Chatham Daily News, August 20, 1934).

“Don Tayburn [Tabron] was a little skinny guy. He was about five foot eleven, five foot ten, and he was about as smooth and he was fast for a shortstop. And he had an arm like a whip. He could throw a ball from any position. He didn’t have to stand up straight or anything like that. He could pick a ball up and almost throw it underhand and it was there” (Harding-Milburn, "The Chatham All-Stars: An Interview with Kingsley Terrell," Polyphony 7, (1985): 111-120).