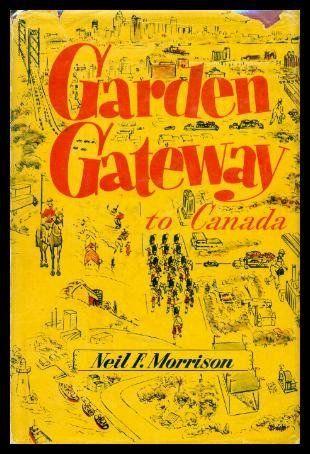 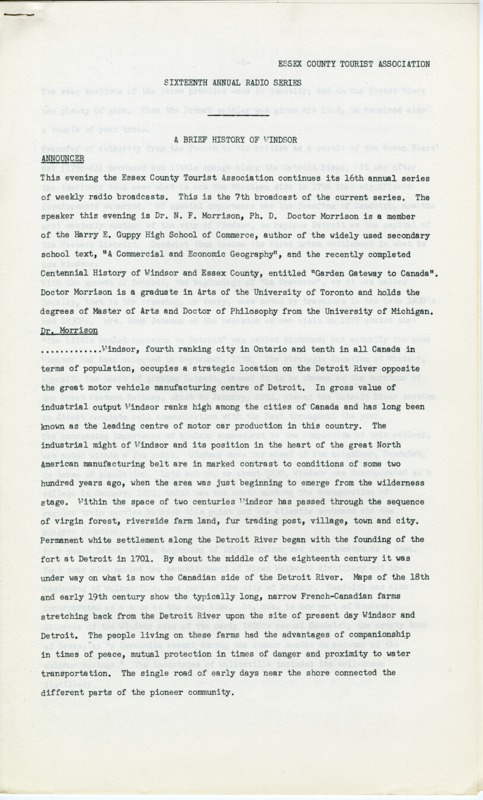 Transcript of "A Brief History of Windsor"

A Brief History of Windsor

In this transcript, the announcer invited the station's honorable guest, Dr. N.F. Morrision, for a talk of Windsor's development in urban areas and the city's connectional with the national narrative. The announcer also promoted two of Dr. Morrision's most well-known publications. The intermittent advertisement included the promotion of Essex County as "the Sun Parlour of Canada" and a new playhouse that began its business in Leamington.

Dr. Morrison began his speech with the geographical features of Windsor, then he gradually introduced topics that were strongly tied with regional identity. The topics included the transfer of French authority to the British in mid-18th Century, rail communication developments, the establishment of Hiram Walker Distillery, the industrial boom during the First World War, the Essex Scottish Regiment in Dieppe in 1942, and more. These themes were the city's milestone developments, and many of the local popuation would them highly relevant. 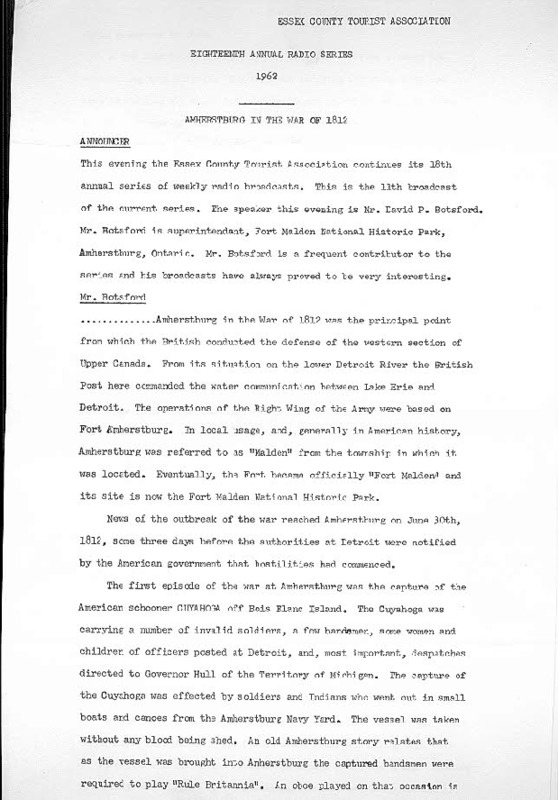 Transcript of "Amherstburg in the War of 1812"

Amherstburg in the War of 1812

In this transcript, the announcer introduced the guest speaker, Mr. David P. Botsford, who directed the Fort Malden National Historic Site in the 1960s. In the advertisement, the announcer promoted Essex County as an ideal places for vacations, especailly for tourists across the border.

During the broadcast, Mr. Botsford explained how Fort Malden and Amherstburg were embroiled in the conflict, and the strategic significance of the locations to the British, the Americans, as well as the Native American parties under General Tecumseh. He then described vividly what happened during the skirmishes and exchange of fire. He then discussed other small engagements and the aftermath of all the war, including a desperate attempt to recover a gold hoard guarded by supposedly well-trusted officers near Fort Malden. 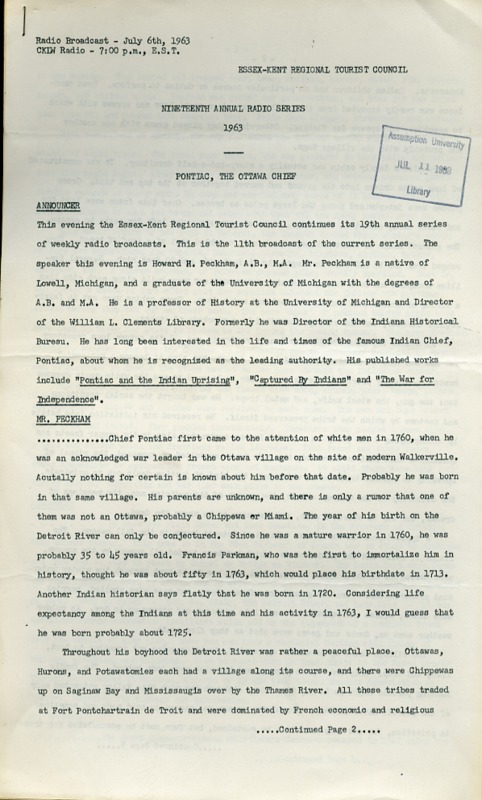 Transcript of "Pontiac, the Ottawa Chief"

The announcer began the transcript with an introduction of the guest speaker, Mr. Howard H. Peckham, a history profeesor at the University of Michigan. During the brief advertisement session, The announcer promoted Essex and Kent counties as excellent tourist destinations, perfect during summer times, and easily accessible from Michigan and Ohio through the traffic tunnel between Detroit and Windsor.

Mr. Peckham began his speech with an introduciton of Chief Pontiac's early life in Ottawa Village, which is located at nowadays' Walkerville. Pontiac grew up in an environment where hunting tools and firearms were highly accessible, and he was actively involved in fur and firearms along with the Ottawas. Mr. Peckham then mentioned how Pontiac's participation in the French-Indian War and his pursuit of peace settlement with the Amercians after the war. However, Pontiac was assassinated with unknown reasons, and he remained buried at the stop where was killed.