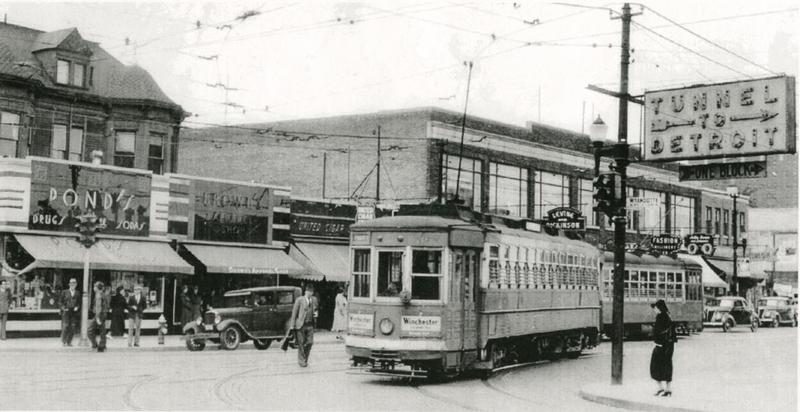 Streetcars in downtown Windsor in 1938.

Transcripts of "Rise and Fall of the Trolley Car"

Rise and Fall of the Trolley Car

This radio transcript began with the announcer introducing the station's guest, Dr. N.F. Morrison, who gave a speech about the introduction of the trolley car system throughout Essex County. Dr. Morrison narrated the stories behind Windsor trolley cars and its inevitable demise.

Little known that Windsor had the first electric car system in Canada. It was originally built to connect the city of Windsor and Walkerville in 1886. The streetcars were a fascinating scene as commuters were used to horse-driven carriages, and some automobiles on the streets, but never a train-looking vehicle traveling down the street. However, due to high maintenance expense, especially during the Great Depression, the streetcars slowly rolled out of the scene of Windsor.

In the middle and at the end of the trasncript, the announcer advertised about the tourist destination of Essex County as the "Sun Parlour of Canada". 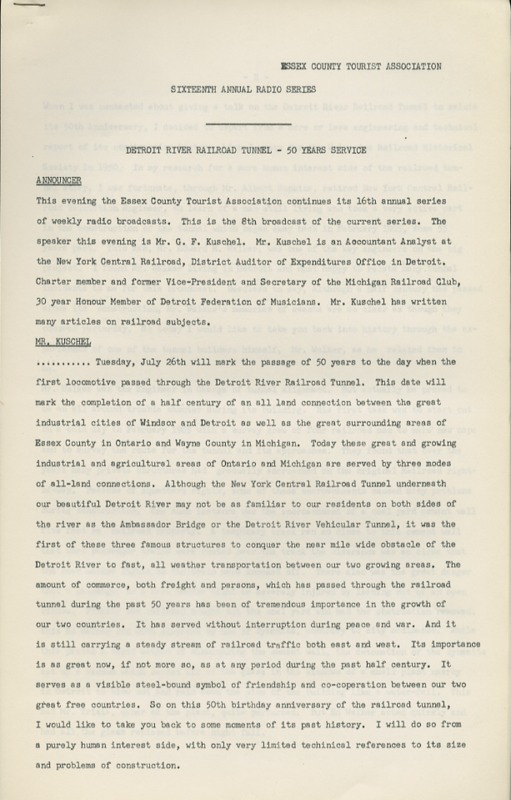 The transcript began by a quick anouncement of the topic and the guest, Mr. Kuschel, who was a writer and a former employee of the railroad company in the region. His speech included the development and operations of the railroad tunnel across the Detroit River. The announcer interrupted his speech with the news of entertainment during the week, including the "Sun Parlour Playhouse" openining in Leamington and the Emancipation Day celebration throughout Essex County

According to Mr. Kuschel, the Detroit Railroad Tunnel was not built without great challenges. There were funding problems, concerns with the construction workers' safety, technical difficulties including issues with the tunnel alignment, and the problem with materials' expansion under long exposure to heat from the sun. Mr. Kuschel addressed these problems during the speech, and he also mentioned how trains began running on the rails in the tunnel and terminated their operations on December 29th, 1953. 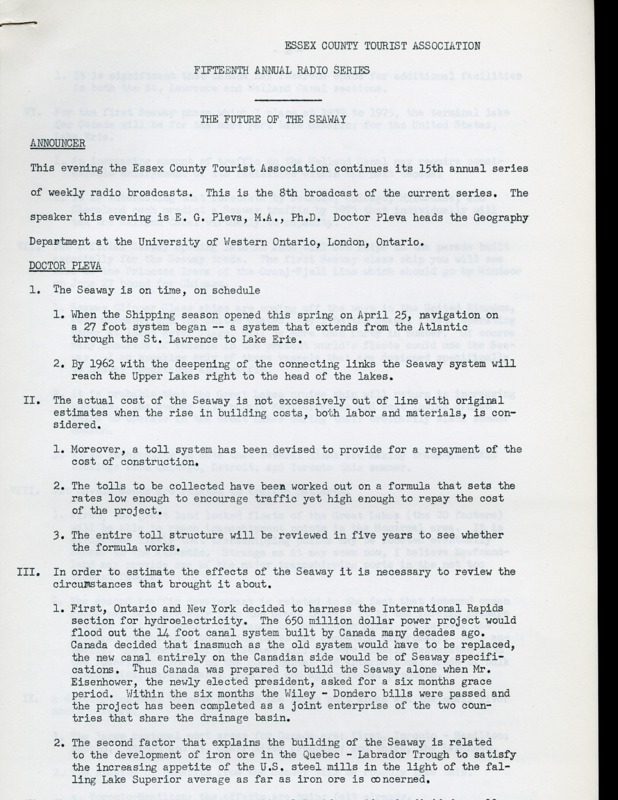 Transcripts of "The Future of the Seaway"

The Future of the Seaway

This set of transcript followed the same format as in other broadcasts, although it was slightly different in the structure of the content. After the introduction, the guest speaker, Dr. E.G. Pheva, discussed the future development of the river navigation through the Great Lakes and St. Lawrence River to the Atlantic, also known as the "Seaway". The midway announcement included the news of the Royal family's visit in Windsor during their tour in Canada and a reminder of the dates for Harmsworth Trophy Race as well as the Silver Cup Race.

The "Seaway" was a hotly debated topic in the field of geography, international shipping, municipal jurisdictions, and more. During the the broadcast, Dr. Pheva listed each and every single factor that would potentially affect the development of the seaway. For example, he mentioned that parts of the river were frozen several months a year, which prompted the possibility to keep the Seaway open throughout the year. Also, Dr. Pheva emphasized the importance of co-operation between the U.S. and Canadian government, since both two countries had equally significant amount of traffic on the waterways.