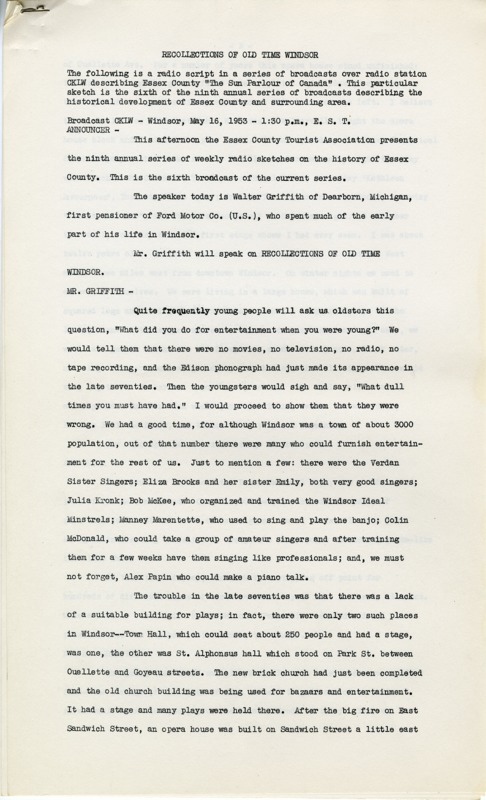 This transcript belongs to one of earliest sets of broadcast series. It started with a brief introduction of the topic and the guest, Mr. Walter Griffith, first pensioner of Ford Motor Co.During the midway advertisement, the announcer promoted Point Pelee National Park as a pleasant visiting point with a distinctive geographical feature on the island.

Mr. Grffith talked about how people in older generation passed time in late 19th century. Most forms of entertainment included playing music, watching theatre plays, fishing, crossing the river and roaming Detroit downtown, and more. There were also active celebrating events during holidays. For example, the local churches held picnics and built bonfires to celebrate Dominion Day, whereas during Queen Victoria's Birthday, there would be parades of participants from military regiments as well as civil organizations. 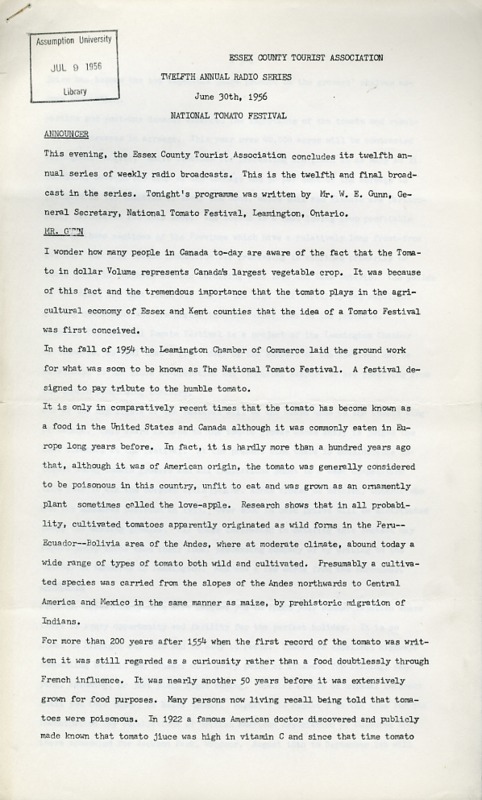 Transcript of the "National Tomato Festival"

This set of radio transcripts described the National Tomato Festival in Leamington in 1956. As usual, it began with the announcer's introduction of the guest, Mr. W.E. Gunn, who gave a speech about the history and origin of the National Tomato Festival. The announcer interrupted Mr. Gunn for a brief advertisement of the events happening in Essex County during summer, including the Emancipation Day celebrations and the Detroit Riverama festival. The anouncer also mentioned and promoted Mr. Gunn's new publication at the end of the transcript.

As part of the series of fall festivals, National Tomato Festival was a celebration of the harvest of the year. There were all sorts of activities in the festival, including prize winning competitions, parades, farm produce exhibits and more. However, one of the greatest feature of the festival included "Tomato King of Canada", which was to be awarded to whoever possessed the largest tomato at the festival. The winner of that year's competition was Mr. Abram Froese of Ruthven, ON.