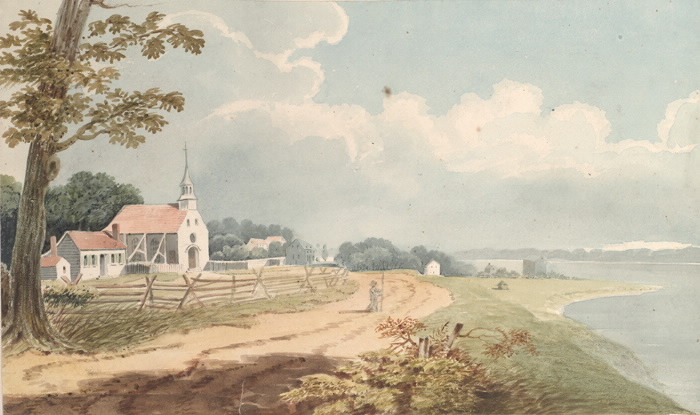 This painting may be one of the earliest visual records of the Jesuit Mission. 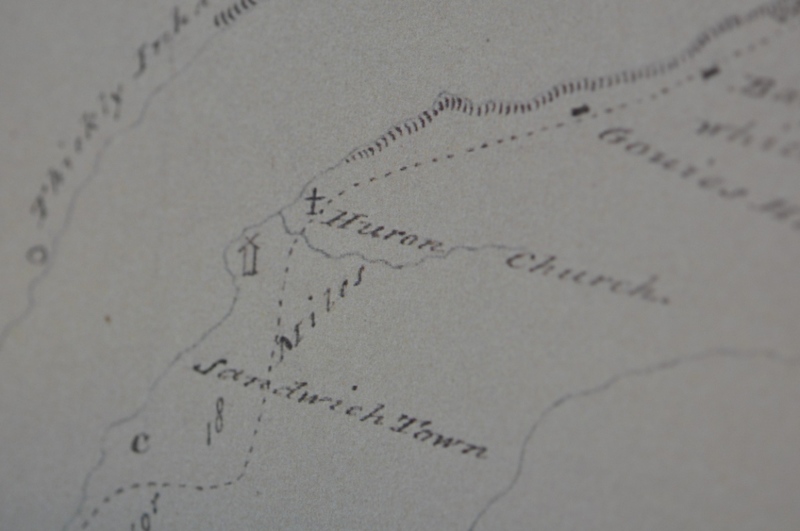 This map identifies the location of the Jesuit Mission.

With the founding of Fort Detroit in 1701, so too came the establishment of a Catholic presence. St. Anne de Detroit was founded on July 26, 1701 as the second oldest continuously operated Catholic Church in the United States. Those living on the now-Canadian side of the Detroit River would travel across the river to this church for mass and other Catholic sacraments. Many founding French families in Windsor-Essex can trace their family genealogy to parishioners of St. Anne's.

In 1728, a Jesuit Mission was established among the Huron of the area; first on the outskirts of Fort Detroit and then on Boblo Island. In 1747 this mission was moved to the present site of Assumption Church, where it grew steadily. The first church structure was built in 1765 and construction on the current church was completed in 1845.

Below is a timeline of events pertaining to the Jesuit Mission and establishment of Assumption Church.

* This timeline has been compiled from several different resources, and at this time is the best understanding of events based on historical data. Should new information be discovered and corroborated then the timeline will be adjusted to include the new information.

1728 - Father Armand de la Richardie, a Jesuit Missionary, establishes first mission in Detroit. This mission was known as the  "Mission des Hurons de la Pointe de Montréal du Détroit", or in some records as "The Mission of Our Lady of the Assumption among the Hurons in Detroit".

1735 - Mission documents indicate there are 600 Christians in the missionary. This mission consisted of mainly Huron First Nations.

1744 - Father Potier comes to the region to assist Father Richardie, living within the Huron Village on the island.

1747 - Approximately 500 inhabitants on Bois Blanc, along with Father Potier. A rebellion takes place and the Huron Village is abandoned.

1748 - Huron Village and mission are moved to Pointe du Detroit - the area of the current Assumption Church and land under the Ambassador Bridge.

1765/1767 - First (second) church built to replace chapel. May have been built in the same location.

1767 - Father Potier forced to sell land 'gifted' to him by the Huron's to alleviate the mission's debt. 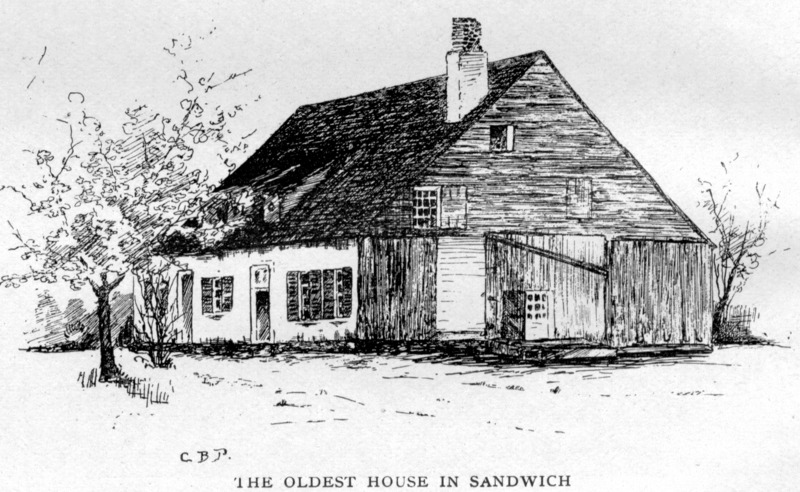 This images shows the original mission house design, before an addition was added to the structure. Image courtesy of SWODA

1787 - Second (third) church was built. This church was built of logs and was located on the eastern edge of what is now Assumption Park, in front of the current church between University Ave and Riverside Drive.

1825-1831 - Under the leadership of Father Crevier, some resources indicate  a windmill with stone foundation and a millers residence were erected, between the Kings Highway and the riverfront.

1845 - Present church completed and open for worship. The building was 60 ft. x 120 ft. and now forms the nave of the current Assumption Church.

1848 - Cemetery was relocated to the south of the church.

1857 - Assumption College opened under the leadership of the Jesuit Fathers.

1860 - With the completion of the new church Bishop Pinsonneault chose to move the Episcopal See and bishops residence to Assumption Parish. He had the cemetery moved to its current location at the corner of Huron Church and Wyandotte. Bishop Pinsonneault erected the large framed Bishop's Palace on the former cemetery grounds. In 1869, the next bishop moved the See back to London and by 1896 the Bishop's Palace was in disrepair and demolished.

1874 - Tower and Sanctuary added to the church.

1907 - Former sacristy and retreat chapel demolished due to poor conditions. Following this the Rosary Chapel was built to the west of Assumption Church. 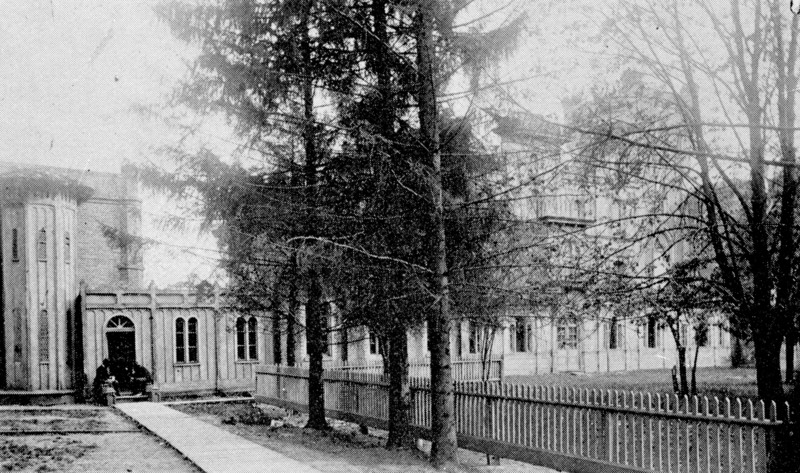 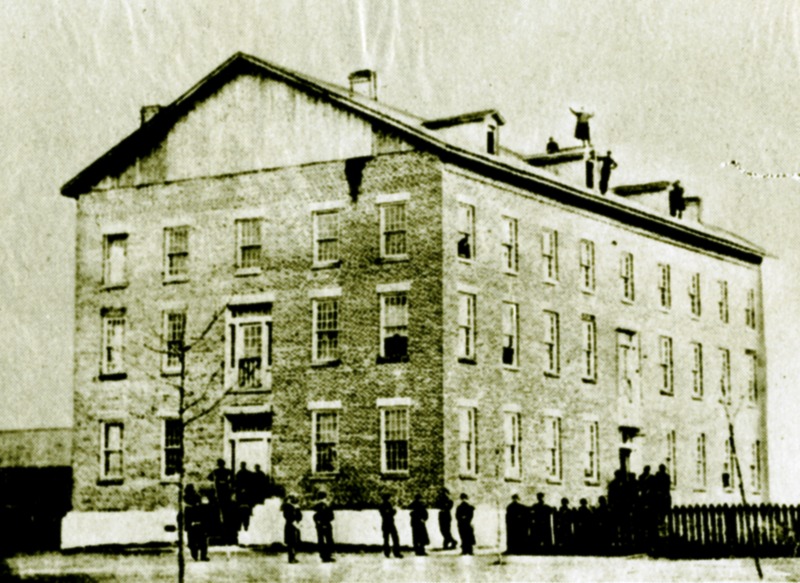 * This timeline has been compiled from several different resources, and at this time is the best understanding of events based on historical data. Should new information be discovered and corroborated then the timeline will be adjusted to include the new information.

1747/1748 - Original Jesuit Mission house built on Assumption Parish grounds. The building faced the Detroit River and was located north of University Ave and east of the priests walk.

1767-1781 -During Father Potier's time with the parish an addition added to the west of the building.

1895 - Photos show that by this time the original 1747 built structure had been demolished, leaving only the western addition.

1901 - Photos show the Girardot wine cellar basement being dug. The wine cellar was located to the back of the mission house and most likely faced University Avenue.

???? - Mission house moved a few hundred feet to the southwest, perhaps to the opposite site of the priests walk.

1912 - Mission house was struck by lightning and burned. 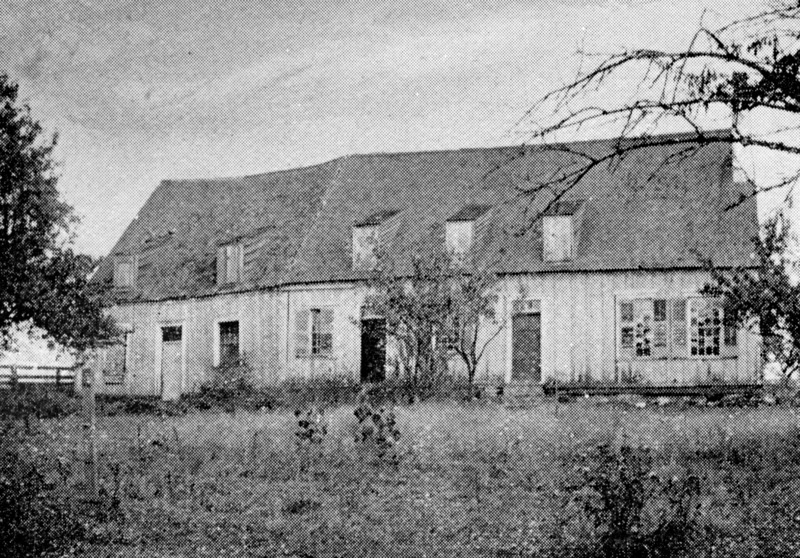 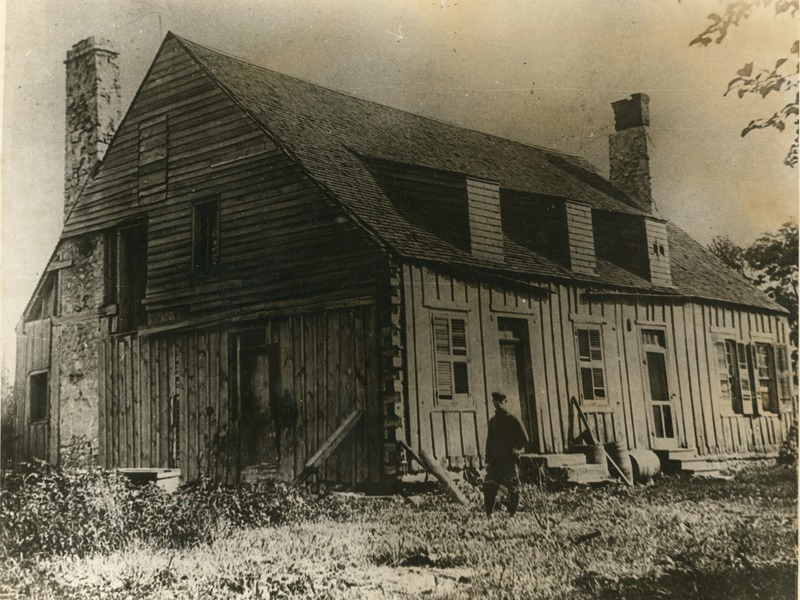 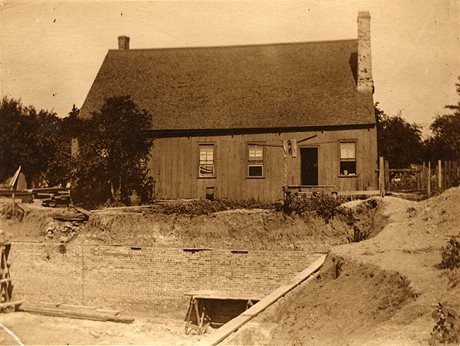 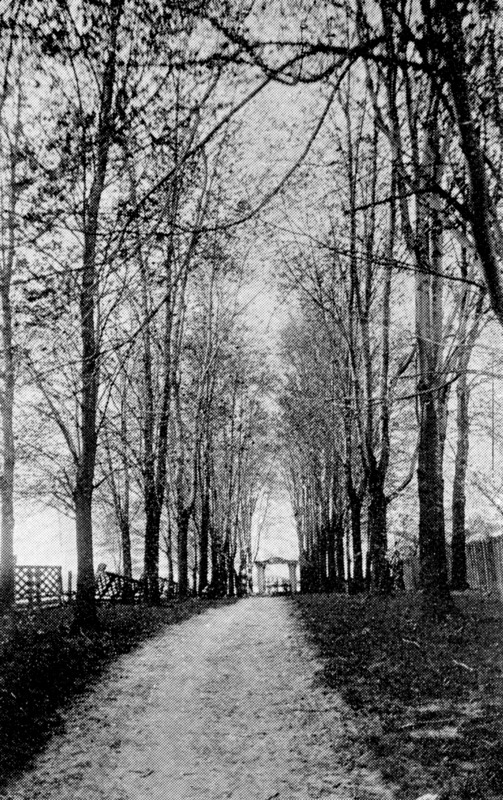 Priest's Walk from Detroit River up to Assumption Church, 1893. 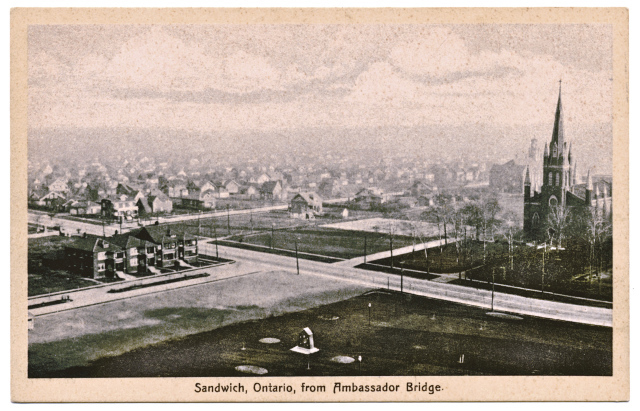 Neal, Frederick. The Township of Sandwich: Past and Present. Windsor: The Record Printing Company Limited, 1909.