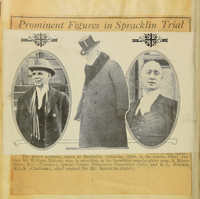 Following the murder of Beverly Trumble at the hands of Rev. Spracklin, several trials had taken place to determine the outcome of Spracklin’s fate, whether it be guilty or not guilty. It is here through the gruelling trials that we are met with the legal team behind all avenues. For the first trial, Crown Attorney Rodd was the prosecution, while R. L. Brackin was chief counsel for Spracklin. The trial itself, after deliberation, resulted in the Coroner acquitting Spracklin on the grounds of self­defense. Oddly, the Crown Attorney Rodd had even agreed with this decision. The outcome of this trial caused many conflicting opinions, and prompted Spracklin to return to court, where he was given a $10.000 dollar bail. The bail was paid and Spracklin was released. W. H. Furlong, attorney for Mrs. Trumble, deemed this outcome insufficient. He advocated the arraignment of Spracklin, After discussions between Attorney General W. E. Raney and Crown Attorney Rodd, Spracklin was put back on trial for the murder of Beverly Trumble. Prior to this second trial, W​. H. Furlong, Mrs. Trumble’s attorney, forwarded a letter to Attorney­General Raney, asking that a special prosecuting attorney, acceptable to Mrs. Trumble, be appointed to conduct the case for the crown when Spracklin is placed on trial. Mrs. Trumble herself suggested that the individual be chosen from out of Windsor, resulting in the individual being unaffected by the local sentiment as he is not conversant with conditions in the city. This was all done to ensure the fairest possible outcome for the trial. During the second trial in February for the murder, the Crown Attorney Rodd was replaced with A. Munro Grier, K.C., as the Crown Attorney. R. L. Brackin was again chief counsel for Rev. Spracklin. Chief Justice Sir William Mulock was the presiding judge over the entire trial. After scrupulous discussion amongst the legal teams and jurors, Rev. Spracklin was once again deemed not guilty on the charges of the murdering of Beverly Trumble. The legal representatives of the respective clients played an important role in the trial deliberations, resulting in the acquittal of a presumed innocent man, Reverend Leslie Spracklin.