The Life of John Askin 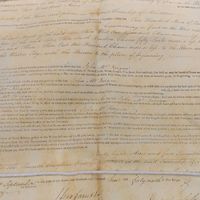 John Askin was the son of a Scottish merchant, born 1739 in Aughnacloy within Northern Ireland. He sailed to North America in 1758 and worked as a sutler (a merchant who travelled along with an army selling provisions to the soldiers) in Albany, New York. After the fall of New France, he entered the fur trade. His business venture failed after being bankrupted due to Pontiac’s uprising. Afterwards, he moved to Michilimackinac where he operated a store and farmed. While residing in Michilimackinac, he entered developed a close friendship with traders Isaac Todd, James McGill and Alexander Henry along with Arent Schuyler DePeyster, the local commandant. In 1781, Askin moved to Detroit in order to enter a trade partnership with Robert Hamilton and Richard Cartwright, who operated at Fort Niagara, along with Isaac Todd and James McGill, stationed in Montreal. Here, Askin later entered the Miamis Company in 1786. Unfortunately, the declining animal population resulted in the failure of the fur trade in Detroit and the bankruptcy of the Miamis Company in 1789, leaving Askin in debt to his trade partners. Thankfully, his partners remained close friends and supported him financially and provided him with the opportunity to enter the shipping business along the Great Lakes, selling supplies to the garrison and local natives.

Askin personally proved most interested in land speculation, against the advice of his partners. Their disapproval of the questionably legal land speculations proved correct. In 1795, Askin along with his son and many other locals, later named the Cuyahoga syndicate, attempted a purchase of over one and one half million acres along the southern shore of Lake Erie (1). Impeded by Anthony Wayne, their land claims were denied by the United States Congress yet Askin’s lofty goals did not end here. Askin had gained additional partners and, in 1796, convinced the chiefs of the Mississauga, Ojibwe and Odawa to lease a large section of land along Lake Erie to the syndicate for a term of 999 years with an annual rent of five shillings. This land today, would amount to five and one-quarter million acres, approximately one sixth of today’s state of Ohio, of which he sold half his share to James McGill and Isaac Todd for nearly thirty thousand pounds(1). After the transition to American control in Detroit, Askin moved across the border and became a Justice of the Peace for the Western District of Upper Canada in 1796. In 1802, to cover his previous debts, Askin traded away a majority of his land to his partners and was granted an estate near Sandwich in exchange. His interest in land ownership continued and was given the nickname “The Count of Kent”(2).

Askin’s personal life was also quite fascinating, his first three children are speculated to have been born from the native slave, named Mannette, that he freed in 1766. He treated these children on equal terms as his later nine children from his wife Marie-Archange Barthe, whom he married on June 21st, 1772. Upon his death in 1815, Askin left his legacy in the form of land for his children and a compilation of land documents, correspondence and other paperwork.'