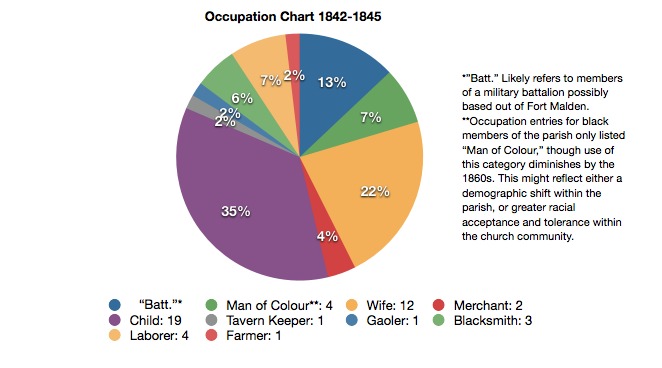 Unfortunately, the occupation category became far more sporadically recorded during the 1860s, so the 1840s data cannot be compared with this era. However, there are still significant things that we can learn about the St. John’s community from the 1840s information. First, it is no surprise that the majority of people who died had no formal occupation at all. The largest occupation category is “Child,” at 35%, followed by “Wife” at 22%. This reflects the lack of health services available to treat children who were susceptible to illness, and for women who often died during childbirth. It is also important to remember, however, that the women of the St. John’s community would have undertaken a wide variety of work within their households, even if this is not reflected in their occupation title. Furthermore, one should take note that many of the occupations listed had a distinctly urban character, with “Merchant, “Blacksmith,” “Gaoler,” and “Tavern Keeper” all included, in comparison to only one farmer. Lastly, the third most popular occupation listed was “Batt.”, later understood to be referencing a “2nd. Battalion.” It is likely that this battalion was part of the local militia, and that these men may have initially joined during the uprisings of 1837-38 like our featured Local Life, Louis Fluett. However, this does not explain why so many of these militiamen died during the period of 1842-45, long after the conflict subsided, and this remains a mystery for future historians to unravel.