Beverly Trumble was the childhood friend of Leslie Spracklin. Trumble was a more popular person than Spracklin, and this caused a rift between them, turning them into the most bitter rivalries. This grudge that Trumble and Spracklin shared, would last until the death of Trumble himself. Trumble grew in constant competition of Spracklin, choosing the seemingly exact opposite life of Spracklin. Later into his life, Trumble opened one of the most successful establishments in the Windsor ­Essex area, aptly named the Chappell House. Once prohibition fell into effect, Trumble found himself living on the opposite side of the law. He turned the Chappell House into a speakeasy, selling alcohol illegally. Trumble was a well known man in the community and well liked by everyone, except for Spracklin. Trumble spent most of his time hiding the sale of alcohol at his establishment for fear or being caught by Spracklin, who would spend most of his time watching Trumble and the Chappell House very carefully. Countless times Trumble was almost caught in illegal activity, usually by Spracklin, but was always able to establish a scapegoat or raise a reasonable doubt to spare himself. This however, only saved Trumble for so long. He met his demise early morning November 6th, to a bullet wound from Spracklin himself. Spracklin confronted him on illegal alcohol charges in the Chappell House, when an argument broke out, ending in Trumble being shot by Spracklin. Trumble died in his wife’s arms only 15 minutes later. Trumble’s funeral was very large and people from all over the city came to see the funeral. 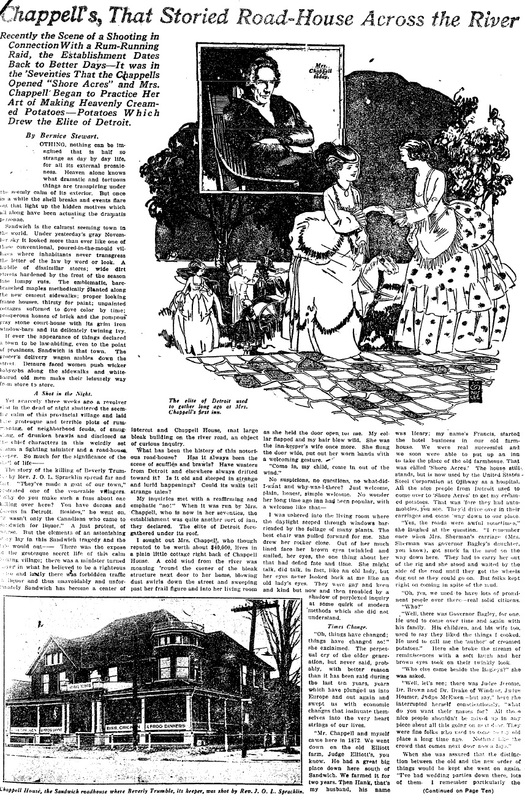 Chappell's That Storied Roadhouse Across the River